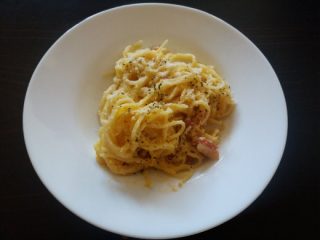 This delicious and easy to make dish just screams ITALY.

About 300g of Pancetta

About 50 grams of parmesan or pecorino cheese.

Heat the water on medium heat until it starts to boil.

Until you are waiting for the water to boil, take 3 eggs, separate the egg whites from the yolk, and put the 3 eggs yolks into the bowl. As for the 4th egg, don’t separate the yolk, crack the egg and put it all into the bowl. Now add about 2 tsp or 20 grams of grated parmesan. Add a pinch of salt and pepper. Whisk the eggs and the cheese until you get a uniform mass – this will be the cream that we will use later. 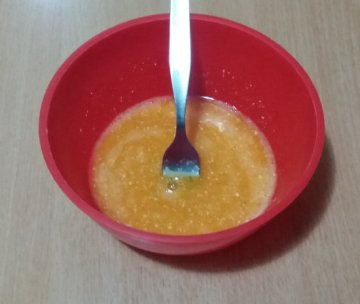 Take the pancetta and cut it into tiny cubes, like in the picture. 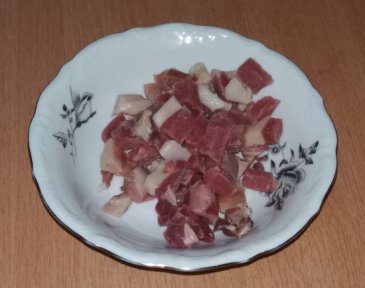 Since the water should be boiling at this point, put the spaghetti in the pot and cover the pot. Lower the temperature a bit and let them cook for about 5 – 7 minutes.

Heat the pan on medium to high heat until it becomes warm. Put the butter on the pan and spread it evenly. Crush 2 cloves of garlic and add them with the pancetta into the pan.

The pasta should be done about now, just remove it from the heat.

The fat from the pancetta should start to melt. When the garlic starts to turn yellowish, remove it. Put the spaghetti into the pan and use the spaghetti water to stop the frying process.

NOTE: The fat and the pasta water acts as the emulsifiers, and this is the step in which you can mess the dish up. If you did this correctly you have everything else in the bag.

Now when the frying has stopped put the cream into the frying pan, and add some more pasta water. Mix well until you have covered the pasta with the cream.

Put the pasta into the bowl. Personally, I add another 20 – 30 grams of grated parmesan and a pinch of oregano, basil, and parsley for a better taste. 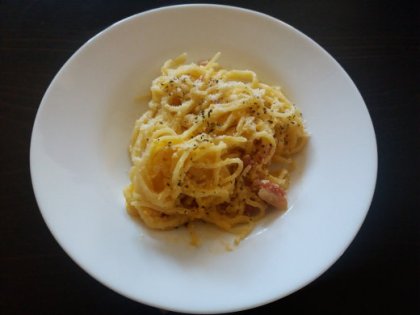